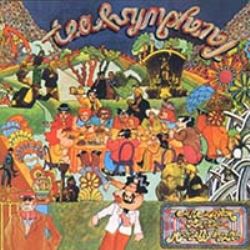 SKU: ECLEC2509
Categories: 10.95, Esoteric Recordings, Esoteric Sale, Physical, Sitewide Sale
Share:
Description
• A NEWLY REMASTERED & EXPANDED EDITION OF THIS CLASSIC 1969 DEBUT ALBUM BY TEA & SYMPHONY
• REMASTERED FROM THE ORIGINAL MASTER TAPES
• WITH ONE BONUS TRACK
• BOOKLET WITH NEW ESSAY
ESOTERIC RECORDINGS are pleased to announce the release of a newly remastered and expanded edition of the classic 1969 debut album by TEA & SYMPHONY, “An Asylum for the Musically Insane”. This album was one of the first to be released on the now legendary HARVEST label, appearing in November 1969.
The band were a Progressive Folk band comprising of the core members JEFF DAW (Vocals, Guitar, Flute), JAMES LANGSTON (Vocals, Guitar) & NIGEL PHILLIPS (Drums, Recorder, Keyboards). The group were part of Jim Simpson’s Birmingham-based Big Bear Management stable of artists (who also included BAKERLOO, BLACK SABBATH and LOCOMOTIVE).
“An Asylum for the Musically Insane” is now regarded as a classic of the era, with original HARVEST vinyl copies changing hands for significant sums. This official Esoteric Recordings reissue has been newly remastered from the original tapes and includes the bonus track ‘Boredom’ from the band’s debut single. It also features a booklet with restored artwork and an essay.
N.B: This title is released 28th August 2015 and will not be dispatched before this date.
TRACK LISTING:
1. ARMCHAIR THEATRE
2. FEEL HOW SO COOL THE WIND
3. SOMETIME
4. MAYBE MY MIND – WITH EGG
5. THE COME ON
6. TERROR (IN MY SOUL)
7. TRAVELLIN’ SHOES
8. WINTER
9. NOTHING WILL COME OF NOTHING
BONUS TRACK
10. BOREDOM
A-SIDE OF SINGLE: RELEASED IN JULY 1969
Additional information
Tracklist
Track listing as above.
Reviews (0)