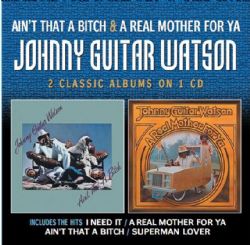 SKU: CDBRED546
Categories: 10.95, Cherry Red Records, Physical, Robinsongs, Sitewide Sale
Share:
Description
Robinsongs and Cherry Red are honoured to be representing the Legendary
Johnny Guitar Watson’s DJM catalogue. And we launch with a 2 on 1 of two of Johnny’s greatest albums
“Ain’t That A Bitch” & “A Real Mother For Ya”.
These albums were originally released in 1976 & 1977 respectively
and were both certified Gold status in America.
Jam packed with Hits & Funk Anthems including ‘I Need It’, ‘Superman
Lover’, ‘A Real Mother For Ya’ (Top 5 U.S. R&B Single), ‘I Want To Ta-Ta
You Baby’, ‘Lover Jones’ and ‘The Real Deal’.
Johnny Guitar Watson passed away while on stage in Japan in 1996, it is
claimed his last words were “Ain’t That A
Bitch” a reference to the song he was performing at the time.
Having played with the likes of Frank Zappa, Little Richard, Johnny
Otis, Sam Cooke & George Duke, Johnny Guitar Watson certainly can be
described as a Soul/Funk Legend.
Etta James described him as her favourite singer of all time.
Sleeve notes by acclaimed writer Daryl Easlea.