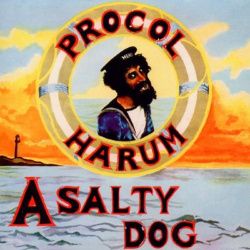 Esoteric Recordings are proud to announce the
release of a newly re-mastered and expanded edition of the classic 1969 album A
SALTY DOG by PROCOL HARUM. Released in June 1969, the record followed on from
the huge international success of the band’s debut single “A Whiter Shade of
Pale” and the follow up single “Homburg” and the superb albums PROCOL HARUM and
SHINE ON BRIGHTLY.  One of the finest
releases of the era “A Salty Dog” saw the exquisite song writing of Gary
Brooker and Keith Reid honed to perfection on highlights such as the album’s
title track, “The Devil Came From Kansas”, “Wreck of the Hesperus”, “The Milk
of Human Kindness” and more.  Recorded at
Abbey Road studios, the album captured the excellence of the musicians in the
group, namely Gary Brooker (voice, piano), Robin Trower (lead guitar), David
Knights (bass guitar), B.J. Wilson (drums) and Matthew Fisher (Hammond organ) Newly re-mastered from the original tapes, this
edition of “A Salty Dog” includes the bonus track ‘Long Gone Geek’ (B-side of
the single ‘A Salty Dog’ and a booklet with previously unseen photographs.