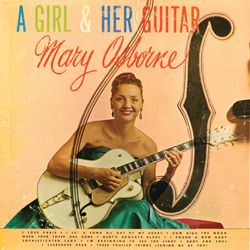 A Girl & Her Guitar
Mary Osborne

“The only electric guitar I knew of was the Hawaiian guitar, I’d listen to all the jazz guitarists of the time, but they all played acoustic. But here was Charlie Christian playing Django Reinhardt’s ‘St. Louis Blues’ note for note but with an electric guitar. It was the most startling thing I’d ever heard.” Mary Osborne

North Dakota-born Mary Osborne was the great unsung heroine of the jazz guitar. A disciple of Charlie Christian and a true pioneer, she was the only woman to rank in what might be termed the “Golden Generation” of jazz guitarists. She was the possessor of an inventive, ardent style that confirmed her as one of the early architects of R&B and rock and roll.

Although acknowledged by critics and by her peers, Mary’s career was nevertheless obstructed by gender barriers. If her abilities were at least comparable to any of her contemporaries, she cannot be said to have achieved anything like the recognition she deserved.

In the late forties and fifties Osborne shone in an array of big band and small combo dates including with Mary Lou Williams, Coleman Hawkins, pianist Beryl Booker, Ben Webster, Dizzy Gillespie and Art Tatum. She worked with Billie Holiday, appeared with Lester Young on the CBS TV show Adventures In Jazz and lead her own groups on dates for the Signature, Aladdin, Decca and Coral labels.

In 1959, she recorded this, her debut album, “A Girl & Her Guitar” for Warwick with a stellar line-up comprising John Coltrane and Ella Fitzgerald accompanist, pianist Tommy Flanagan, former Cab Calloway rhythm guitarist Danny Barker, bassist Tommy Potter, who had been one of Charlie Parker’s “classic quintet”, and Count Basie drummer Papa Jo Jones.

Our edition comprises the original long-player, complemented by a selection of solo and session sides which Mary recorded during the 1940’s with Williams, Hawkins and Booker. Osborne was a fine singer and some of the leader cuts feature her voice.

N.B: This title is released 18th September 2015 and will not be dispatched until this date.

MARY OSBORNE: A GIRL & HER GUITAR

3. HOW HIGH THE MOON

4. WHEN YOUR LOVER HAS GONE

8. I’M BEGINNING TO SEE THE LIGHT

11.THESE FOOLISH THINGS (REMIND ME OF YOU)