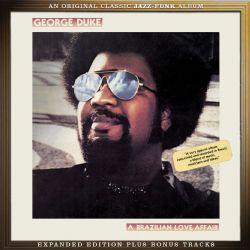 In 1977, master musician, recording artist and performer George Duke had enjoyed his biggest sales success with ‘Reach For It,’ a track from the album “Don’t Let Go” and had followed it in 1978 with ‘Dukey Stick’ from the best-selling LP, “Don’t Let Go.”

On the back of his success, the multi-faceted Duke – whose musical resume included stints with Frank Zappa, Al Jarreau, Jean-Luc Ponty and Cannonball Adderley – was ready to further explore his artistic vision and persuaded Epic Records to get behind the recording of an album focused on the music of Brazil.

With the classic funky and infectious title track becoming a rare groove dance winner in the UK, the album A BRAZILIAN LOVE AFFAIR became a favourite among Duke’s audience worldwide as well as one of Duke’s own stated personal musical highlights.

Standouts include ‘Summer Breezin,’’ ‘Brazilian Sugar’ ‘Sugar Loaf Mountain,’ and ‘Up From The Sea…’ This expanded edition includes the single version of the title track. Notes by renowned writer Jeff Lorez includes quotes about the project from George Duke.