For this week’s #NewMusicFriday we’ve got a real treat in store from Robinsongs! ‘Confunkshunizeya – The Mercury Anthology’ is the first double CD career anthology of the R&B supergroup Con Funk Shunk. Find out more here:

• Between January 1977 and October 1986, Con Funk Shun, a seven-piece group originating from Vallejo, a waterfront city in Northern California’s Bay Area, racked up 25 R&B hits in their native USA, including the No. 1 R&B single, ‘Ffun’. They were renowned for serving up addictive slices of brassy, dance floor funk but also had a profoundly romantic side; excelling at slow, smooth, passionate ballads. The group was driven by the twin talents of vocalists and songwriters, Michael Cooper and Felton Pilate II, whose contrasting musical characteristics would come to define the group’s distinctive sound and style.

• The 32 essential tracks on Confunkshunizeya – The Mercury Anthology take us back in time to relive the group’s golden years when they were a ubiquitous presence in the American R&B charts during the late 1970s and first half of the ’80s.

• The standout tracks on this compilation are as mentioned above ‘Ffun’ where we bring you the full 12” version, and the Top 10 R&B tracks ‘Shake And Dance With Me’, ‘Chase Me’, ‘Got To Be Enough’, ‘Too Tight’, ‘Baby, I’m Hooked (Right Into Your Love)’ and ‘Burnin’ Love’, all the album versions, no single edits.

• Con Funk Shun broke up as a band in the late 80’s but reformed for a one-off concert in 1993, and enjoyed the reunion so much that they started working the live circuit again and have been performing live ever since, even recording a new album in 2015.

• As journalist Charles Waring describes in the sleeve notes on this package, that period in their history is vividly brought back to life by the 32 classic funk and soul jams on Confunkshunizeya – The Mercury Anthology, an indispensable career retrospective where ‘Ffun’ and a good time are guaranteed… 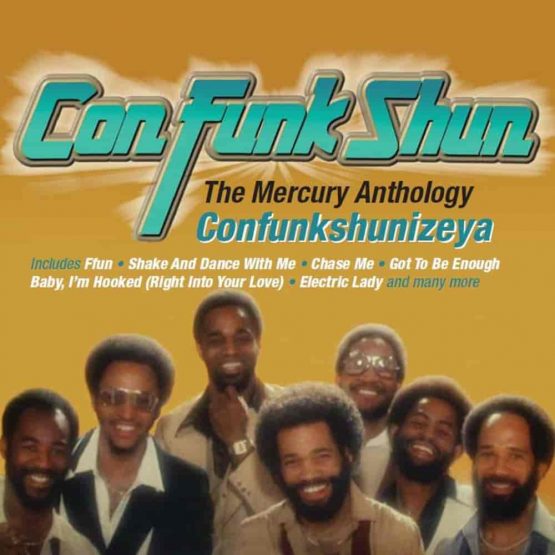 Posted by Jack Clough / 122
Recently announced from the world of Dissonance Productions – new music from Seven Sisters and Toledo Steel is on the way and you listen to brand... Continue reading

Posted by Jack Clough / 1115
August is shaping up to be a huge month here at Cherry Red! With releases and reissues from Kim Wilde, Jim Bob, The Vapors, Aztec... Continue reading

Posted by Jack Clough / 322
We’ve got a trio of Reggae classics out this week from Doctor Bird Records!  There is music from Derrick Harriot, The Silvertones, and more available... Continue reading