Milk Of The Tree, our 3CD Anthology Of Female Vocal Folk & Singer-Songwriters 1966-1973 is Lauren Laverne’s compilation of the week on BBC Radio 6 Music

We’re delighted to hear our Milk Of The Tree, our 3CD Anthology Of Female Vocal Folk & Singer-Songwriters 1966-1973 is Lauren Laverne’s compilation of the week on BBC Radio 6 Music this week! Check out what she has to say about the collection here  and watch the official trailer here…

Notwithstanding one or two isolated exceptions, it wasn’t until the mid-Sixties that independent female voices really began to be heard within the music industry. The feminist movement naturally coincided with the first signs of genuine musical emancipation. In North America, Joan Baez and Buffy Sainte-Marie emerged through the folk clubs, coffee-houses and college campuses to inspire a generation of wannabe female singers and musicians with their strong, independent mentality and social compassion, while the British scene’s combination of folk song revival and the Beatles-led pop explosion saw record company deals for a new generation of pop-folkies including Marianne Faithfull, Dana Gillespie and Vashti Bunyan.

Within a year or two, the burgeoning counter-culture saw the arrival of psychedelia and folk-rock as the likes of Pentangle and (in the US) the Linda Ronstadt-fronted Stone Poneys emerged from the clubs and into the charts. But in America at least, burnout soon set in, and the era’s excesses duly gave way to a quieter, more reflective musical and lyrical style. The LA rock and folk communities decamped to Laurel Canyon, in the Hollywood Hills region of the Santa Monica Mountains, to chill out in bucolic, soul-searching introspection. With Sixties stalwart Jackie DeShannon’s 1968 album Laurel Canyon leading the way, workers from the hit song factories of the publishing companies joined the dyed-in-the-wool folkies in a new movement of singer/songwriters that reached its zenith in 1971 with the release of seminal albums like Joni Mitchell’s Blue and Brill Building refugee Carole King’s multimillion-selling Tapestry.

In the last two or three years of the decade, the demarcation lines in British music had become similarly blurred, with amplified rock bands becoming attracted to the more pastoral strains of the folk idiom, and traditional folk club performers developing an affinity with the underground. Folk clubs evolved into Arts Labs, and the burgeoning college/university circuit provided equal opportunity for heavy rock bands, electric folk-rock acts and the introspective acoustic singer/songwriter. Suddenly, the scene was awash with female performers looking to become the British answer to Joni Mitchell, a huge influence on the scene ever since exiled American record producer Joe Boyd had circulated Joni’s songs amongst British musicians in late 1967. Mitchell quickly became established amongst aspirant performers as the singer/songwriter template.

Over the course of four hours and sixty tracks, Milk Of The Tree focuses on the music made in the late Sixties and early Seventies in both Britain and North America by either female solo artists or acts with featured female vocalists. Along the way, we encounter San Franciscan psychedelia, LA folk rock, Swinging London pop-folk, electric folk, progressive folk and even folk club folk as well as (of course) a plethora of singer- songwriters (including various ladies of the Canyon) from the movement’s golden age.

As well as featuring most of the leading figures from both sides of the Atlantic, Milk Of The Tree includes many performers who received little attention at the time but who now have a cult reputation amongst collectors. A significant number of tracks were unreleased at the time, while the set also includes the first-ever appearance by pioneering female rock duo Emily Muff, two American girls who were based in England during the period in question but failed to land a recording contract.

With a 44-page booklet crammed with rare photos and details of the various acts featured, the clambox-housed Milk Of The Tree is not only a fascinating social document but, we hope, a hugely entertaining snapshot of a particular time, place and frame of mind that produced some enduring, spellbinding music. 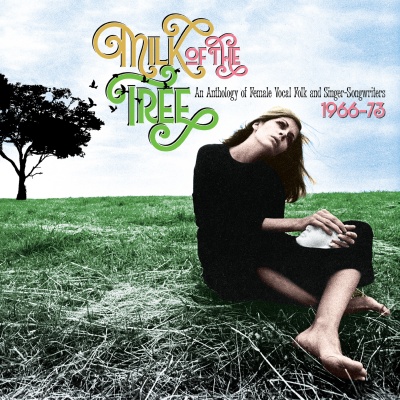 Pre-order Milk Of The Tree here.

Posted by Jack Clough / 359
Esoteric Recordings is pleased to announce the release of a new boxed set featuring all of the albums recorded by the legendary ARTHUR BROWN &... Continue reading