INSPIRAL CARPETS| Don’t miss tonight’s #inspiralthursday Twitter listening party at 9pm and pick up a copy of the album here for only £4.99!

Head over to the hashtag #inspiralthursday on Twitter tonight and join the discussion for the Inspiral Carpets listening party! To celebrate, we’ve slashed the price of  ‘Inspiral Carpets’ on CD down to only £4.99 – pick up a copy of this essential lockdown listen! 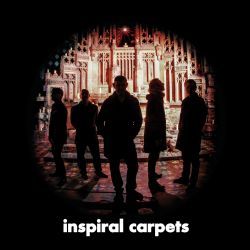 THE INSPIRAL CARPETS – along with the Stone Roses and the Happy Mondays – made their name as part of the whole ‘Madchester’ scene, with a string of classic singles and a lucrative line in iconic T-shirts.

•    In September, the band unveil their first new album of studio material for two decades, simply entitled INSPIRAL CARPETS. The album was recorded over the past year or so in Airtight Studios, Chorlton-cum-Hardy, south Manchester and has been mixed by Jim Spencer (The Charlatans, etc.).

•    The album is fanfared by a brand new single, “Spitfire”, which is released at the end of August. The record also includes their previous Record Store Day single “You’re So Good For Me”.

•    Another of the LP’s highlights is the garage punk opus “Let You Down”, which boasts an amazing and unique cameo by special guest and legendary punk poet John Cooper Clarke!

Posted by Jack Clough / 346
Lemon Recordings is our March Label Of The Month! Bag some Classic Rock flavoured bargains with the code: LEMONMARCH20 for 20% off. *Please note this... Continue reading

Posted by Jack Clough / 462
Esoteric continue their series of Jon Anderson reissues with 1982’s ‘Animation’. Find out all about this expanded and remastered edition here… Esoteric Recordings are pleased... Continue reading