Cherry Red Records is equally delighted and proud to announce the newly remastered and expanded reissues of Howard Jones’ first and second albums Human’s Lib and Dream Into Action in November. Here’s what’s on the way… 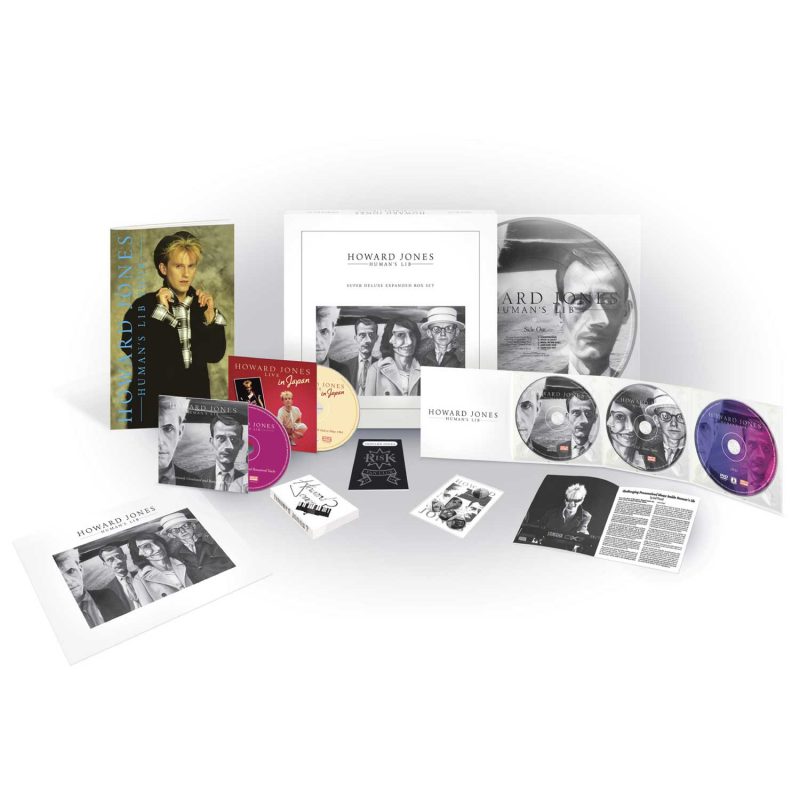 Originally released in March 1984, “Human’s Lib” entered the UK Album Charts at No.1 selling over 100,000 copies in the first week and spending a total of 57 weeks in the chart whilst achieving Double Platinum status with sales in excess of 600,000 copies. Four songs from this album were released as singles in the UK, all of which reached the Top 20: ‘New Song’ peaked at No.3, ‘What Is Love?’ at No.2, ‘Hide and Seek’ at No.12, and ‘Pearl in the Shell’ at No.7. As well as achieving great success in the UK, “Human’s Lib” and the various singles taken from it also enjoyed tremendous success internationally in such countries as USA, Canada, New Zealand, Australia and throughout most of Europe.

With Howard’s full involvement, this prestigious debut album is being re-issued in four remastered formats including a Super Deluxe Box Set with the following features: 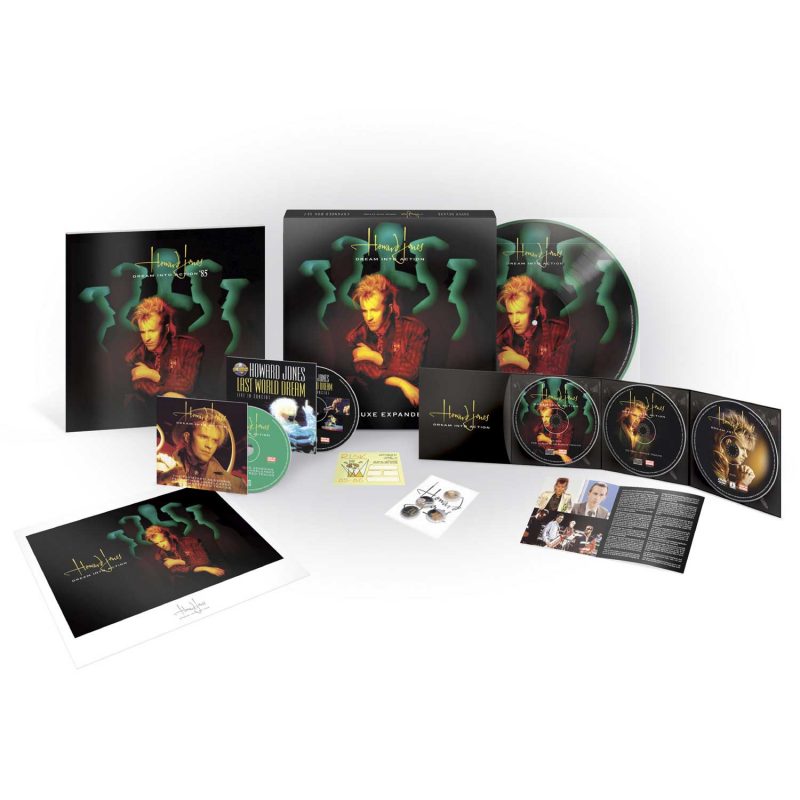 Released in March 1985, “Dream Into Action” reached No.2 in the UK Album Charts and achieved Gold Album status. Like its pre-decessor “Human’s Lib”, “Dream Into Action” contained four Top 20 hit singles; ‘Things Can Only Get Better’ reached No.6, ‘Look Mama’ at No. 10, ‘Life In One Day’ at No.14 and ‘No One Is To Blame’ at No.16. In addition to these four Top 20 Hit singles, the original CD version of “Dream Into Action” also contained a bonus track, namely Howard’s hit single from the previous year – ‘Like To Get To Know You Well’ – which reached No.4 in the Singles Chart. “Dream Into Action” also enjoyed massive international acclaim and success; particularly in the USA where it reached No.10 in the Billboard Album charts achieving Platinum status. It spawned three Billboard Top 20 hit singles including ‘Things Can Only Get Better’ at No.5, ‘Life In One Day’ at No.19 and a re-recorded version of ‘No One Is To Blame’ featuring Phil Collins on backing vocals and drums (produced by Hugh Padgham), which gave Howard his biggest ever US hit single reaching No.4. As well as achieving great success in the UK (# 1) and USA, “Dream Into Action” and the various singles taken from it also enjoyed tremendous success internationally in such countries as Canada, New Zealand, Australia and throughout most of Europe.

Again, the Cherry Red reissue will come in four remastered formats, the Super Deluxe Edition of which has the following features:

The other three formats for both albums include white (Human’s Lib) and green (Dream Into Action) vinyl editions, a deluxe 2CD+DVD digipack edition and a version of the remastered original single CD edition.

A very limited number of the Super Deluxe Edition Box Sets and Vinyl editions ordered from Cherry Red will come with an exclusive postcard hand-signed by Howard.

You can pre-order all formats exclusively from Cherry Red Records here: http://cherryred.co/Hojo2018

But that’s not all… 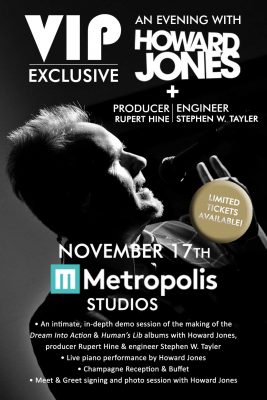 To celebrate these forthcoming super-deluxe reissues of Howard Jones’ iconic ‘Dream Into Action’ & ‘Human’s Lib’ albums, we are excited to be holding a truly unique and special event for Howard’s fans on Saturday November 17th at the world-famous Metropolis Studios in London!

A very limited number of fans will be able to buy tickets to come and see Howard Jones along with producer Rupert Hine and engineer Stephen W. Tayler talk in-depth about the making of both the ‘Dream Into Action’ & ‘Human’s Lib’ albums, along with an audience Q&A.

Taking place within a very intimate setting at the mixing desks inside the legendary ‘Studio A’ at Metropolis Studios, this is a true ‘once-in-a-lifetime’ event, not to be missed!

Howard will also give a unique live performance at the piano, featuring tracks from these iconic albums alongside other selections from his career.

Included in this exclusive package is a champagne reception, buffet and a photo & signing session with Howard for all attendees.

There are just 40 tickets available for this incredibly exclusive event – get yours exclusively here!

Please retain your e-receipt for proof of ticket purchase. We will be in touch a couple of weeks before the event with a personalised e-ticket you can print out and bring along for admission on the day.

*Please note there is no parking provided at the venue. You may be able to find parking in the general vicinity subject to local council parking regulations but this is not guaranteed.

**The price of the ticket is admission only and includes a champagne welcome reception and a buffet. The ticket price does not include travel or accommodation costs.

Grab your tickets to this unmissable evening with Howard, Rupert and Stephen here: http://cherryred.co/Hojo2018

Posted by Jack Clough / 114
Thanks to Deezer for curating this '100% Dinosaur Jr' playlist! It's filled wall-to-wall with classic cuts from the pioneering American alt-rockers, and you can follow... Continue reading