Fish Out Of Water – The official Chris Squire limited edition deluxe box set is out tomorrow!

A DVD OF THE “FISH OUT OF WATER” PROMO FILMS, A 2006 INTERVIEW WITH CHRIS SQUIRE & A 2006 AUDIO COMMENTARY BY CHRIS SQUIRE ON DVD (NTSC / REGION FREE)

VINYL CONTENT COMPRISING A REPLICA 180 GRAM GATEFOLD VINYL LP OF “FISH OUT OF WATER” WITH POSTER, AND TWO 7” SINGLES OF “LUCKY SEVEN” B/W “SILENTLY FALLING” & “RUN WITH THE FOX” B/W “RETURN OF THE FOX”, ALL CUT AT ABBEY ROAD STUDIOS

Esoteric Recordings are proud to announce the release of an official limited edition deluxe boxed set of Yes founder CHRIS SQUIRE’s legendary 1975 solo album FISH OUT OF WATER. Recorded in the late Spring and Summer of 1975 whilst Yes was on hiatus as members recorded their respective solo albums, FISH OUT OF WATER was a breath-taking work, and equal in standard to any Yes album in terms of sheer invention and creativity. The album was essentially a collaboration between Chris Squire and his friend Andrew Pryce Jackman, a gifted arranger who had been a member of The Syn, Squire’s pre-Yes group. The sessions saw contributions from former Yes drummer BILL BRUFORD, Yes keyboard player PATRICK MORAZ and noted musicians MEL COLLINS and JIMMY HASTINGS. Released in November 1975, FISH OUT OF WATER was a Top 30 chart hit in the UK and made the US Billboard Top 75 album chart, going on to sell nearly 500,000 copies worldwide.

The highlight of this limited edition deluxe boxed set is a stunning new 5.1 Surround Sound mix (exclusive to this set on an NTSC / Region Free DVD), along with a new stereo mix, from the original multi-track master tapes by JAKKO JAKSZYK and a new re-master of the original 1975 mix by Paschal Byrne. FISH OUT OF WATER also includes four bonus tracks of the single edits of ‘Lucky Seven’ and ‘Silently Falling’, along with both sides of the 1981 single by CHRIS SQUIRE and ALAN WHITE; ‘Run With the Fox’ and Return of the Fox (appearing on CD for the first time).

The boxed set also includes a replica 180 gram gatefold LP with poster of FISH PUT OF WATER (mastered and cut from the original tapes at Abbey Road studios), along with two seven inch singles of ‘Lucky Seven’ b/w ‘Silently Falling’ and ‘Run With the Fox’ b/w ‘Return of the Fox’, both in picture sleeves. To complete the content is a visual DVD (NTSC / Region Free) featuring the 1975 FISH OUT OF WATER promotional film featuring the songs Hold Out Your Hand and ‘You By My Side’, along with a 2006 interview with Chris Squire conducted by Jon Kirkman and a 2006 audio commentary by Chris Squire. Finally, the set also contains a 36-page book with an essay by Sid Smith featuring exclusive interviews with BILL BRUFORD, PATRICK MORAZ, GREGG JACKMAN and JAKKO JAKSZYK.

Always justly proud of his first solo album, it was Chris Squire’s long held wish that a 5.1 Surround mix would be undertaken of the work someday. This Esoteric Recordings edition finally brings this to fruition and is a fitting tribute to the artistry of Chris and his collaborator, Andrew Pryce Jackman. 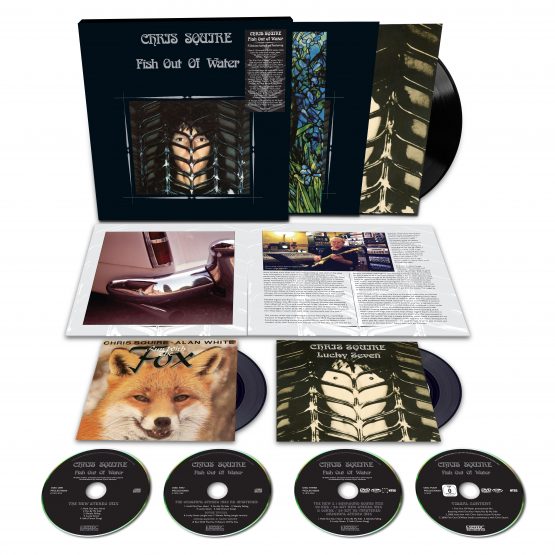 Posted by Jack Clough / 334
Esoteric Recordings is pleased to announce the release of a new boxed set featuring all of the albums recorded by the legendary ARTHUR BROWN &... Continue reading