Fab Gear: The British Beat Explosion And It’s Aftershocks 1963-1967. Check out the trailer for our new 6CD Box Set

FAB GEAR draws heavily from the vaults of Pye Records and sister label Piccadilly, picking up where Castle Music’s Beat Beat Beat series left off many moons ago.

Instead of concentrating on Beat’s initial boom of 1963/64, Fab Gear is focussed instead on the scene’s later gems from 1965/66, which were often musically superior to those earlier works.

Other featured labels include independents such as Ember, President and Oak, as well as a smattering of choices from the majors (Decca, Parlophone, Columbia, Fontana, CBS et al).

From the same team which brought you Night Comes Down.

BRITISH BEAT was the term adopted to describe the exciting new sounds out of Liverpool and other cities in the wake of The Beatles’ explosion onto the world stage in 1963/64.

Named after the slang term forever associated with The Beatles, this mammoth 6-CD box set offers around 180 tracks in chronological order from the mid-1960s, many of which are new to CD and some of which are previously unissued.

FAB GEAR includes many of the era’s biggest names such as The Kinks, The Moody Blues, The Searchers and The Tremeloes and other hit acts such as The Marmalade, The Alan Price Set, The Rockin’ Berries, David & Jonathan, The Ivy League, Twinkle, Peter Jay & The Jaywalkers, Chad & Jeremy, The Tornados, Arthur Brown, Tony Jackson & The Vibrations, The Undertakers, Billie Davis, The Migil 5, The Truth, The Quiet Five and The Sorrows.

The bonus disc 6 contains recordings which weren’t issued at the time, including many tracks which have never been heard before. 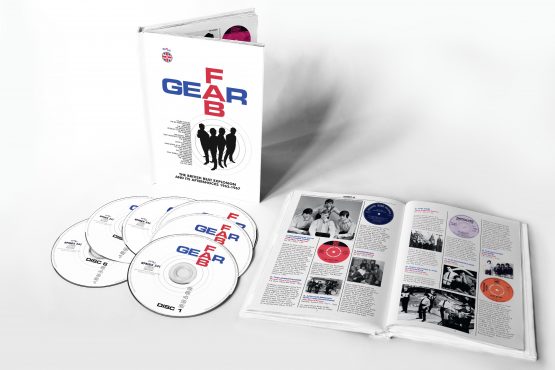 Posted by Jack Clough / 332
Esoteric continue their series of Jon Anderson reissues with 1982’s ‘Animation’. Find out all about this expanded and remastered edition here… Esoteric Recordings are pleased... Continue reading

Posted by Jack Clough / 439
Stacks of new Cherry Red releases, box sets, and compilations are waiting for you to delve into this #NewMusicFriday! Including 'The Cold Sacrifice', a brand... Continue reading

Posted by Jack Clough / 432
The Residents ‘pREServed‘ reissue series continues with Gingerbread Man, available here as a 3CD expanded edition AND on vinyl for the very first time! The... Continue reading