Many tracks make their debut on CD; others have long been out-of- print; all are out-and-out Punk!

Includes around 50 Punk classics which troubled the official Indie charts back in the day!

The most comprehensive and authoritative box set of ‘third wave’ Punk Rock ever assembled!

BURNING BRITAIN is the first-ever box set to properly tell the story of the early Eighties independent Punk scene – nicknamed UK82 – when the music went underground and thrived outside of the major label framework.

With 114 tracks, this longform 4-CD box set follows previous, acclaimed compilations from Cherry Red dedicated to Post-Punk (To The Outside Of Everything), Goth (Silhouettes And Shadows), Mod Revival (Millions Like Us), etc.

The 64-page booklet includes authoritative band biogs and an insightful foreword by respected Punk commentator Ian Glasper (author of the book Burning Britain, which inspired the title of this box set).

Big names from the early days of Punk (The Damned, Angelic Upstarts, UK Subs, Cockney Rejects, The Adicts, The Lurkers, Chelsea) are joined by all the key bands from the next wave, including The Exploited, The Anti-Nowhere League, Discharge, Blitz, G.B.H., The Toy Dolls, Vice Squad, The Business, Peter & The Test Tube Babies, Poison Girls and Conflict. 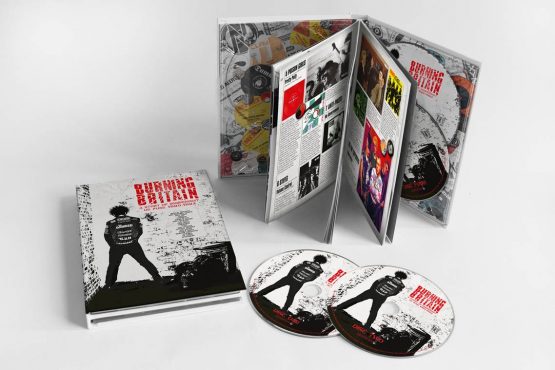 Posted by Jack Clough / 355
Esoteric Recordings is pleased to announce the release of a new boxed set featuring all of the albums recorded by the legendary ARTHUR BROWN &... Continue reading