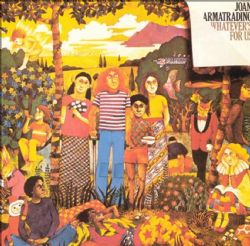 Whatever’s For Us: Remastered and Expanded Edition
Joan Armatrading

SKU: ECLEC2491
Categories: 10.95, Esoteric Christmas Sale, Esoteric Recordings, Sitewide Sale
Share:
Description
A NEWLY REMASTERED & EXPANDED EDITION OF THE 1972 DEBUT ALBUM BY JOAN ARMATRADING, WITH TWO BONUS TRACKS
ESOTERIC RECORDINGS are pleased to announce the release of a newly remastered and expanded edition of the classic 1972 debut album by singer-songwriter JOAN ARMATRADING.
Released on the Cube label in November 1972, “Whatever’s For Us” was recorded at Château d’Hérouville studios near Paris and Trident studios in London. Produced by Gus Dudgeon the record featured contributions from musicians Davey Johnstone, Ray Cooper and Gerry Conway, who had featured on albums by Elton John and Cat Stevens.
The album featured an amalgam of styles and features songs co-written by Joan Armatrading and Pam Nestor. With tracks such as ‘Visionary Mountains’ (later covered by Manfred Mann’s Earthband), ‘City Girl’ and ‘My Family’, “Whatever’s For Us” was enthusiastically received critically and began Joan Armatrading’s career as a gifted songwriter and performer.
This Esoteric Recordings reissue includes two bonus tracks drawn from a 1973 single and has been remastered from the original Cube Records master tapes.
N.B. This title is released 27th April and will not be dispatched before this date.

Track Listing:
1. MY FAMILY
2. CITY GIRL
3. SPEND A LITTLE TIME
4. WHATEVER’S FOR US
5. CHILD STAR
6. VISIONARY MOUNTAINS
7. IT COULD HAVE BEEN BETTER
8. HEAD OF THE TABLE
9. MISTER REMEMBER ME
10. GAVE IT A TRY
11. ALICE
12. CONVERSATION
13. MEAN OLD MAN
14. ALL THE KING’S GARDENS
BONUS TRACKS
15. LONELY LADY
16. TOGETHER IN WORDS AND MUSIC
Additional information
Tracklist
Track listing as above.
Reviews (0)

Whatever’s For Us: Remas...