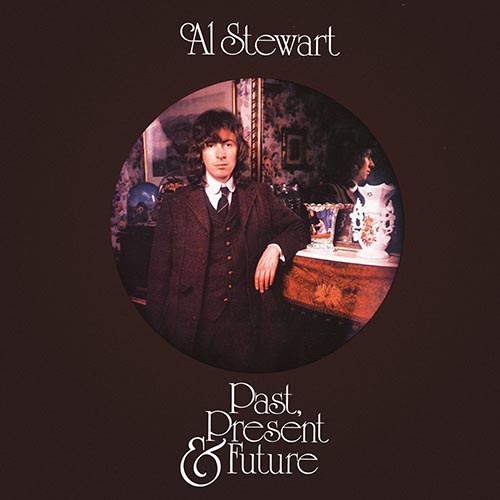 ESOTERIC RECORDINGS are pleased to announce the release of a newly remastered & expanded edition of the classic 1973 album ‘Past, Present & Future’ by the acclaimed singer-songwriter Al Stewart.

ESOTERIC RECORDINGS are pleased to announce the release of a newly remastered & expanded edition of the classic 1973 album by the acclaimed singer-songwriter Al Stewart.

“Past, Present & Future” was the break-through album for Al Stewart. He had already released four albums and had become a popular attraction on the UK live music scene. “Past, Present & Future” would see Stewart focus lyrically on various historical themes in the compositions on the record, including ‘Old Admirals’, ‘Warren Harding’, ‘Roads to Moscow’ and ‘Nostradamus’.

“Past, Present & Future” became Al Stewart’s first US hit album and firmly established his career as one of the finest and most imaginative songwriters of his generation. Featuring such guests as Rick Wakeman, Tim Renwick, Bruce Thomas, Dave Swarbrick, Francis Monkman and Roger Taylor, the album is now regarded as one of Stewart’s finest, with the epic tracks ‘Roads to Moscow’ and ‘Nostradamus’ and classics ‘Soho (Needless to Say)’ forming a part of his concert sets to this.

This classic album has been newly remastered from the original CBS master tapes and includes three bonus tracks taken from singles issued during the period, including both sides of the ‘Swallow Wind’ single. This Esoteric Recordings reissue includes a booklet, which fully restores the original album artwork and a new essay.