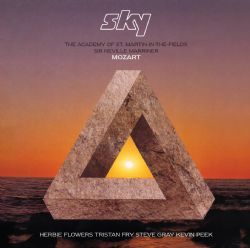 SKU: ECLEC2487
Categories: 10.95, Esoteric Christmas Sale, Esoteric Recordings, Physical, Sitewide Sale
Share:
Description
• A NEWLY REMASTERED OFFICIAL RELEASE OF SKY’s 1987 ALBUM with THE ACADEMY OF ST. MARTIN IN THE FIELDS Conducted by SIR NEVILLE MARRINER
• FULLY RESTORED ARTWORK & BOOKLET WITH NEW ESSAY
Esoteric Recordings are pleased to announce their next release in the continuing series of reissues of the entire catalogue by the legendary classical rock band SKY.
Formed in 1979, Sky brought together the worlds of rock and classical music in a highly successful and inspiring way. Featuring the gifted talents of guitarist JOHN WILLIAMS, percussionist TRISTAN FRY, legendary bass player HERBIE FLOWERS, former Curved Air keyboard player FRANCIS MONKMAN and guitarist KEVIN PEEK, Sky recorded their debut album at Abbey Road studios in the early months of 1979.
The band’s self-titled debut reached the UK top ten in May 1979 and went on to achieve Platinum status in the UK and was also a major hit in Europe and Australia. Also a huge live attraction, SKY released their second album in April 1980. “SKY 2” was a fine achievement, featuring the hit single “Toccata”, and topped the UK album charts upon its release. In 1981 STEVE GRAY replaced Francis Monkman on keyboards, but the band continued their run of success.
John Williams departed the band in December 1983 and the group continued as a quartet. In 1987 they recorded their final album, which saw SKY arrange pieces composed by Wolfgang Amadeus Mozart. “MOZART” featured the Academy of St. Martin in the Fields conducted by Sir Neville Marriner and earned the group their highest ever US chart placing upon release.
Unavailable for over 20 years, “MOZART” has been newly re-mastered from the original master tapes and the original album artwork is fully restored. The booklet features a new essay.
N.B: This title is released March 30 and will not be dispatched before his date.
Track Listing:
1. THE MARRIAGE OF FIGARO: OVERTURE
2. EINE KLEINE NACHTMUSIK: RONDO
3. THE MARRIAGE OF FIGARO: NON SO PIU, COSA SON
4. SYMPHONY NO. 34: LAST MOVEMENT
5. SYMPHONY NO. 35 (“HAFFNER”): ANDANTE
6. THE MAGIC FLUTE: OVERTURE
7. EINE KLEINE NACHTMUSIK: ROMANZA
8. HORN CONCERTO NO. 4 IN E♭: RONDO
9. DON GIOVANNI: LA CI DAREM LA MANO
10. A MUSICAL JOKE: PRESTO
11. COME, SWEET MAY (SPRING SONG)
12. ALLA TURKA: RONDO (INCORPORATING “THE LAUGHING POLICEMAN” & “AFTERMATH – THE 9th  VARIATION ALLA TURKA)
Additional information
Tracklist
Track listing as above.
Reviews (0)