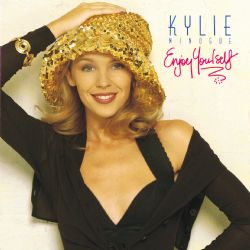 By popular demand, PWL are delighted to reissue ‘ENJOY YOURSELF’, the classic 1989 album from the undisputed princess of pop, KYLIE MINOGUE.

Digitally remastered from the original studio tapes, this reissue marks the very first time the album has been back in print in the UK since its original release.

‘ENJOY YOURSELF’ was originally released in October 1989 and found Kylie consolidating the phenomenal international success of her partnership with PWL and the Stock Aitken Waterman team. Going four times platinum, the album gave Kylie a second chart-topping LP and continued her uninterrupted run of hits with ‘Hand On Your Heart’ (#1), ‘Wouldn’t Change A Thing’ (#2), ‘Never Too Late’ (#4) and ‘Tears On My Pillow’ (#1).

The SPECIAL EDITION CD includes no less than nine bonus tracks, including the unforgettable #1 duet with Jason Donovan, ‘Especially For You’, which originally appeared only on the US edition of the album, plus sought-after B-sides and the essential 12″ mixes of all the singles. The Special Edition features unique picture CD artwork and a 24-page booklet containing full lyrics, new sleeve notes and classic images.

‘ENJOY YOURSELF’ is reissued alongside the other three albums Kylie recorded for PWL: ‘Kylie’ (1988), ‘Rhythm Of Love’ (1990) and ‘Let’s Get To It'(1991). We’re very proud to step back in time and celebrate these classic records and the early years of Kylie’s music career.

NB: This title is released on February 9, 2015 and will not be dispatched until this date.

1. Hand On Your Heart

8. Tears On My Pillow

14. We Know The Meaning Of Love

15. Hand On Your Heart (The Great Aorta Mix)

18. Tears On My Pillow (Extended Version)

19. Especially For You (Extended Version)